Surrey Heath is a UK parliament constituency that is represented in the House of Commons by Michael Gove of the Conservative party. 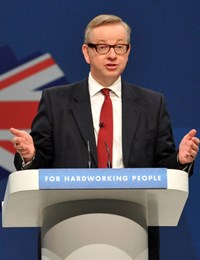 Michael Andrew Gove (born 26 August 1967) is a British Conservative Party politician and the Member of Parliament (MP) for Surrey Heath. He is also an author and a former journalist for The Times newspaper.

Born in Edinburgh, Gove was raised in Aberdeen and began his career as a journalist. He was first elected to Parliament in 2005 for the safe Conservative seat of Surrey Heath in South East England. He was later promoted to the Shadow Cabinet in 2007 as the Shadow Secretary of State for Children, Schools and Families. After the formation of the Coalition Government in 2010, Gove was then appointed Secretary of State for Education.

At its May 2013 conference, Gove was criticised by the National Association of Head Teachers, whose members condemned the climate of bullying, fear and intimidation they claimed he had created during his time as Education Secretary. The conference passed a vote of no confidence in his policies. Votes of no confidence were also passed by the Association of Teachers and Lecturers at conference in March 2013, the National Union of Teachers at its conference in April 2013 (unanimously), and the NASUWT.

On 15 July 2014, Gove was replaced as Secretary of State for Education in a cabinet reshuffle and moved to the post of chief whip of the Conservative Party. This was alleged by some to be a demotion, although Prime Minister David Cameron denied this was the case.

Election turnout for the Surrey Heath constituency in 2010 was 70%, higher than the average UK turnout at 65.1%.

This graph shows the results from 76 people in the Surrey Heath constituency who have taken our quiz, displaying which party best matches their opinions of the series of questions we ask.