South Derbyshire is a UK parliament constituency that is represented in the House of Commons by Heather Wheeler of the Conservative party. 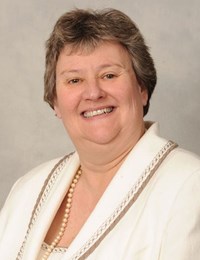 Heather Kay Wheeler (born 14 May 1959) is a British Conservative Party politician, who was elected at the 2010 general election as the Member of Parliament (MP) for South Derbyshire, taking the seat from the Labour Party after 13 years.

Wheeler was brought up in Wandsworth and elected Conservative Councillor on Wandsworth Council at the age of 22. After serving a full council term she married her husband Bob, moving in 1986 to Bretby.

After working in the City of London for 10 years, she qualified as an Associate of the Chartered Insurance Institute.

Wheeler was elected onto South Derbyshire District Council in 1995 and was leader of the Conservative group on the council until standing aside following her election as an MP. Following her election to parliament, she continued briefly as district councillor for Repton but did not seek re-election when her term ended in 2011. Wheeler has previously unsuccessfully fought the general elections of 2001 and 2005 in Coventry South, although a swing to the Conservatives was recorded on both occasions.

Wheeler's husband Bob is the current leader of South Derbyshire District Council. Their daughter Harriet was a council candidate in the 2011 local elections but was unsuccessful.

Wheeler was a member of the Conservative Party's A-List.

Election turnout for the South Derbyshire constituency in 2015 was 68.20%, higher than the average UK turnout at 66.1%.

Election turnout for the South Derbyshire constituency in 2010 was %, lower than the average UK turnout at 65.1%.

This graph shows the results from 67 people in the South Derbyshire constituency who have taken our quiz, displaying which party best matches their opinions of the series of questions we ask.