South Basildon and East Thurrock is a UK parliament constituency that is represented in the House of Commons by Stephen Metcalfe of the Conservative party. 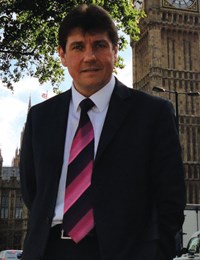 Stephen Metcalfe is an American film director and screenwriter. Metcalfe's career has touched on all forms of dramatic writing; screen, television and stage.

Metcalfe has adapted both stage plays and novels. His play Emily was done for Scott Rudin and Paramount Pictures; Time Flies, by Paul Linke, was adapted for producer Laura Ziskin; A.R. Gurney’s The Old Boy was written for Touchstone Pictures; and Peter Mayle's comic novel Anything Considered was done for producer Stanley R. Jaffe and Sony Pictures.

In 2002 Metcalfe wrote and directed the independent film Beautiful Joe.

Metcalfe's stage plays include Loves & Hours, Vikings, Strange Snow, Sorrows and Sons, Pilgrims, Half a Lifetime, Emily, White Linen, Divirtimenti, The Incredibly Famous Willy Rivers, and White man Dancing. His play The Tragedy of the Commons premiered in January 2011 at Cygnet Theatre Company in San Diego. His young adult novel, The Tragic Age, will be published in 2015.

Election turnout for the South Basildon And East Thurrock constituency in 2015 was 62.30%, lower than the average UK turnout at 66.1%.

Election turnout for the South Basildon And East Thurrock constituency in 2010 was %, lower than the average UK turnout at 65.1%.

This graph shows the results from 49 people in the South Basildon and East Thurrock constituency who have taken our quiz, displaying which party best matches their opinions of the series of questions we ask.